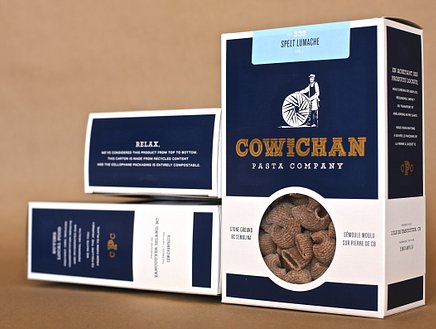 Matt Horn is the product of the culinary management program at Ottawa's Algonquin College. Horn started his culinary career at Domus Cafe in Ottawa, then at Mariposa on the outskirts of Ottawa. Followed by four years as the Chef of Cowichan Bay's iconic Masthead Restaurant and Amuse Bistro for one and half years.

Wanting something of his own and seeing a special artisan niche, Cowichan Pasta came to life in 2010. Cowichan Pasta works with local farmers to grow both ancient grains and modern grains for their pasta production which is then milled at True Grain Mill and Bakery. Producing frozen ravioli and dried pasta using ingredients from BC and many local products such as salt from Vancouver Island Salt Company, Cowichan Valley beef, BC spot prawns, vegetables and foraged items like seaweed and mushrooms when in season.

Cowichan Pasta can be found all over the British Columbia from fine foods stores to larger chains. Cowichan Pasta is the first pasta company in Canada making stone ground pasta with ancient grains such as Spelt, Emmer, Khorasan and Red Fife that is stored in whole kernel form, and then milled fresh with a chosen grind that maintains more of the fibre portion of the wheat than over processed grains.

Matt Horn was recognized for his entrepreneurial spirit in 2013 as one of the Top 40 Foodies under 40 in Western Canada by Western Living Magazine.